last week i got an email from moneysupermarket asking if i wanted to take part in their ‘room for improvement‘ competition. they give you £50 to improve/decorate a room in your house. i desperately needed some storage in my room as i had piles of books, folders and fabric sprawled over the room and ..well, it just wasn’t organised, and i often tripped over or knocked over things!

so, this came at the perfect time! ideally if i’d had more time and a bit of extra to spend myself (on travel/delivery mainly as i don’t have a car) i would have loved to gone around some antiques places or car boots/jumble sales and gotten some midcentury or vintage furniture. alas, that isn’t something i can do at the moment. also, we’re not allowed to paint the walls, so that is a bit of a downer as i hate this textured wallpaper and would love to have an accent wall at least!

i tried to be a mixture of thrifty and getting the best i can with the money. i ended up getting two main pieces from ikea, a bookshelf type thing (i’m not quite sure what to call it!) and a small table, as well as a rug to make the floor look a bit more homely too ..as well as cover up the horrible brown carpet a bit. i’ll detail everything at the end of the post.

so, here’s some before pics, and as usual, some after pics too! i’ll give a bit more info with some of  those. 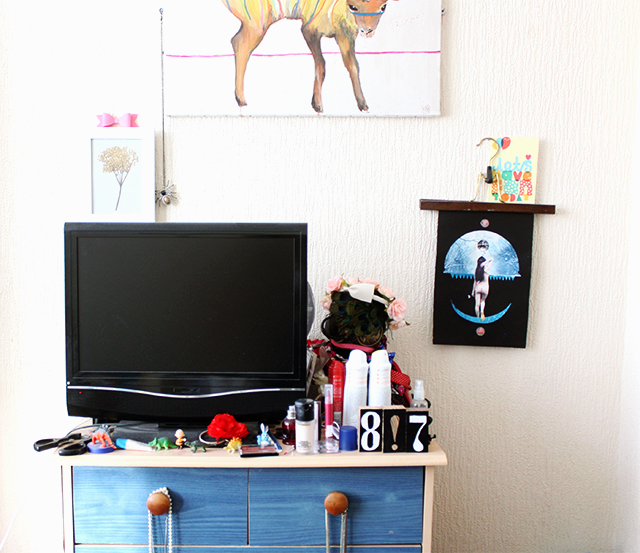 this is opposite my bed as it was before. just a chest of drawers and a tv mainly. i don’t like these drawers either, but our landlord has no other place to store them, so we’re stuck with what’s here with this and other furniture in the house.

most of the books that resided below it. there was nowhere else in the house suitable for them really, and although it took up a bit of walking space, it was better than randomly piling them somewhere. to the left is just some of my folders with collage bits in. 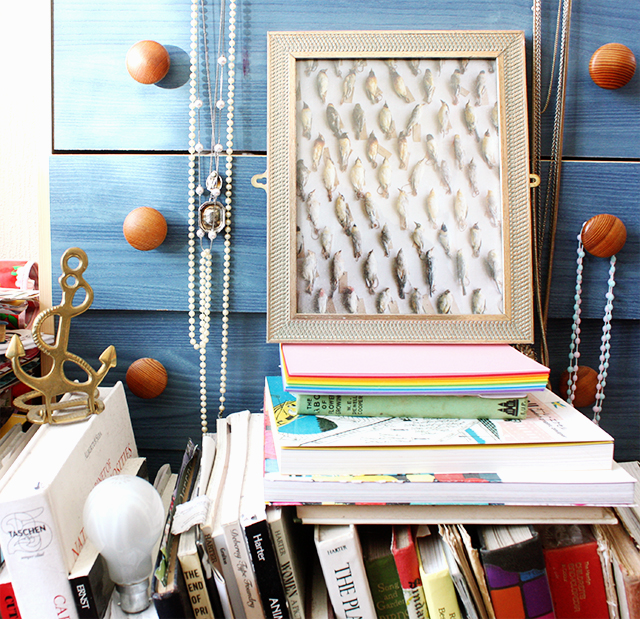 some of my fabric pile underneath my wardrobe. once again, always being tripped over! 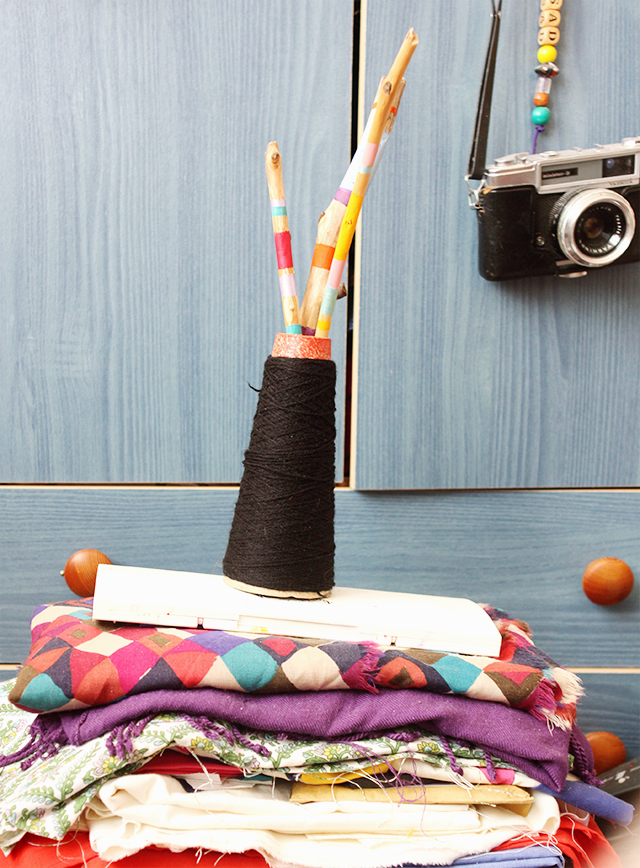 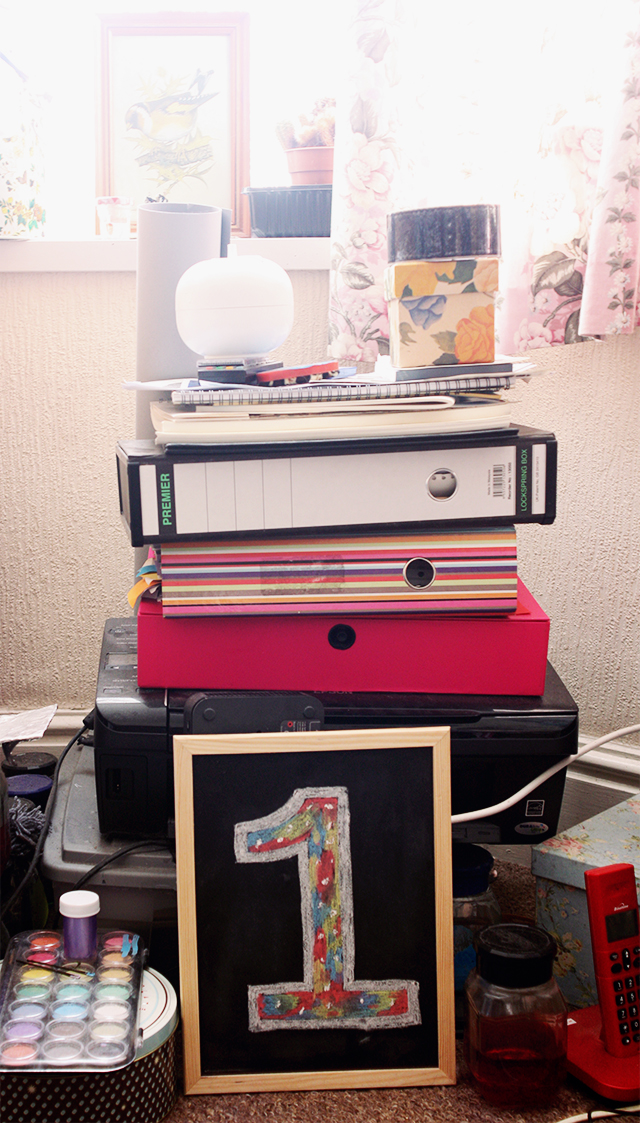 a rather precarious pile of folders and other bits above my scanner. just looks messy mainly, as well as a bit annoying to access my scanner when i need it. 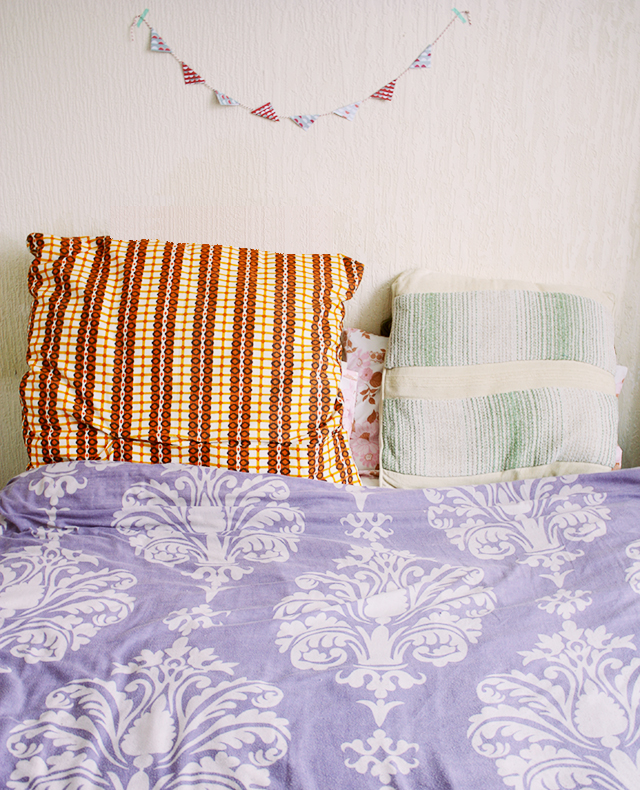 the bed wasn’t bad before, but we only have a couple duvet covers. they’re quite pricey (to me anyway) so i decided to just buy fabric and make a new one. results below..

i wish i’d remembered to take a shot of the room as a whole before! 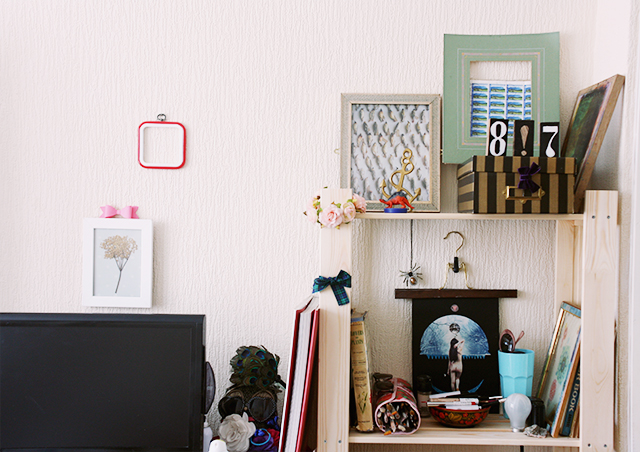 new shelf by the tv, along with lots of things that were scattered around before. the fabric that was previously on the floor is now in the striped box, which i bought from a charity shop. also i bought that pastel blue cup to store sunglasses in. ideally i’d like to paint this shelf white and maybe paint a subtle design on it too, but i don’t have paint for that at the moment.

the books and pile of folders (as well as my lovely orla kiely box full of paper) are now neatly shelved away! so much more room to walk, as well as much easier access to things. 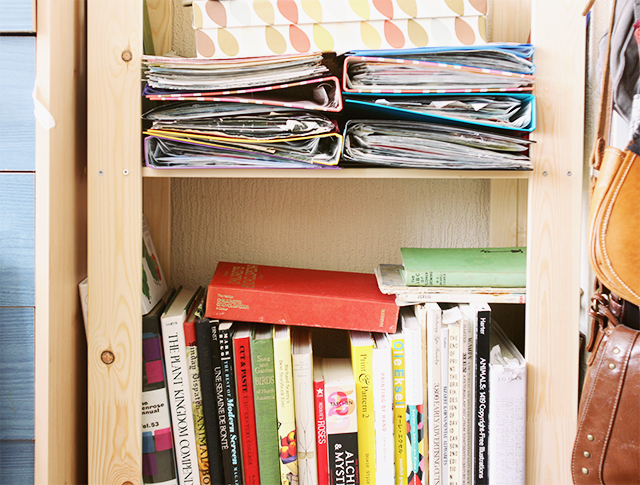 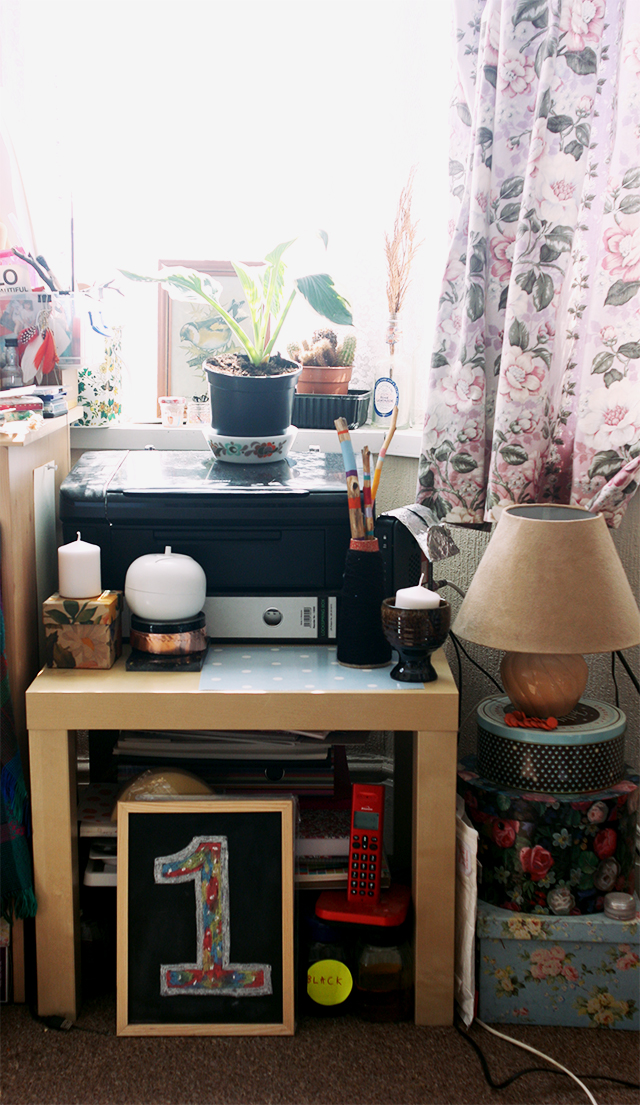 the folder/scanner pile is now reduced to much less and looks much neater on (as well as under) a table. access to my scanner is much easier now! plus it provides a nice little area to take photos by the window now too. the plant wasn’t a necessary item as such, but having plants in the room makes me feel much happier. seeing as my bedroom is also my studio, it’s always good to have that extra bit of happiness, isn’t it? 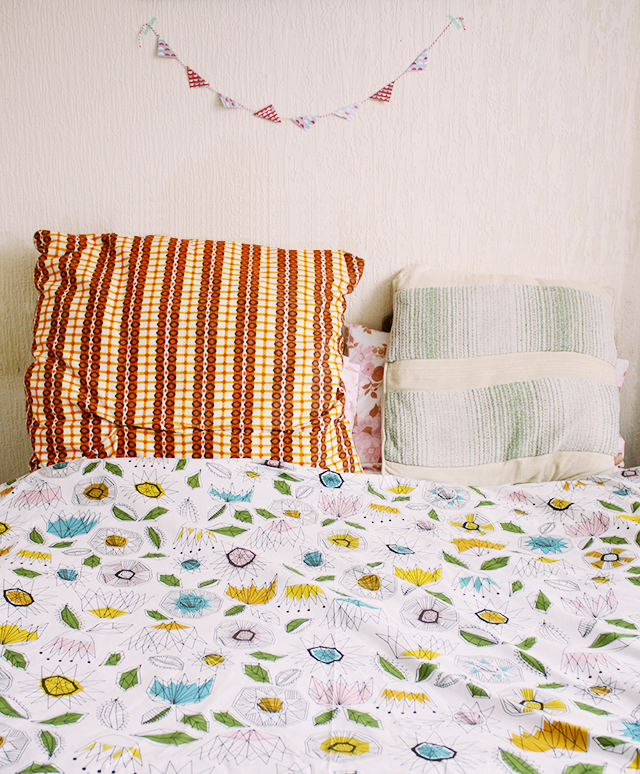 nice having another bed cover! makes the room look lighter too. love the pattern, both retro and modern looking. 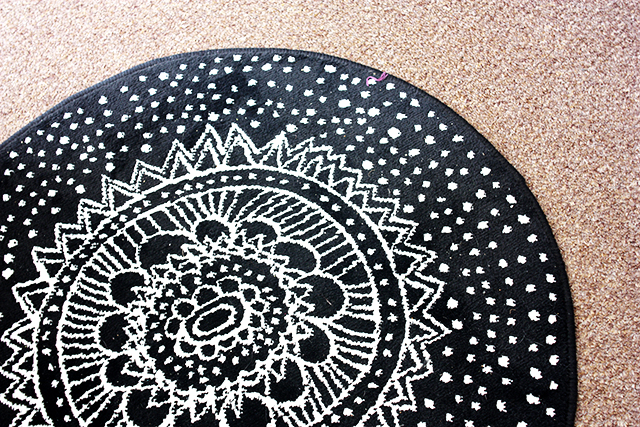 the rug. it’s so nice having something in that big brown expanse of nothingness! i really wanted a nice big fluffy rug but they were way out of my budget. love the pattern on this one though. dots!

talking of dots, i bought some adhesive copper tape and decorated my lovely yellow plant pot with some dots. i just used a hole puncher to make the circles. 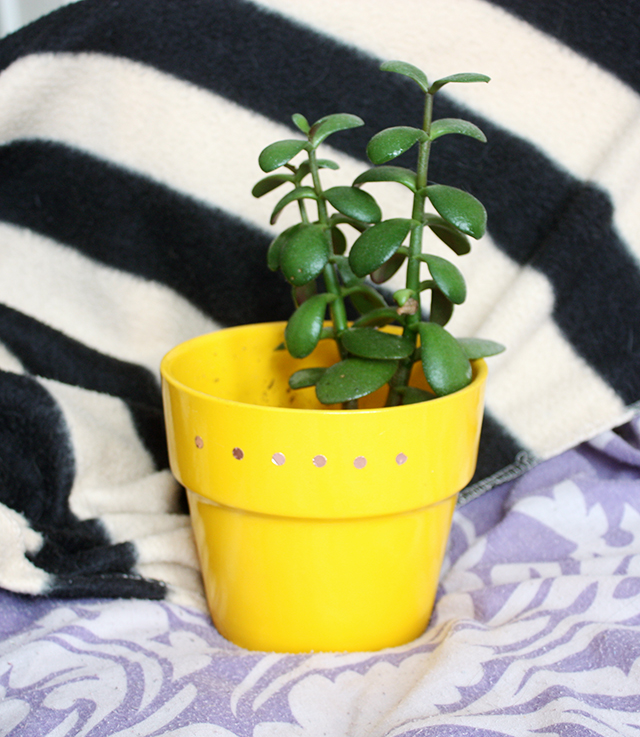 i did remember to take an after shot of the main part of  room though! it’s so much better organised and easier to walk through. feels so much bigger too! 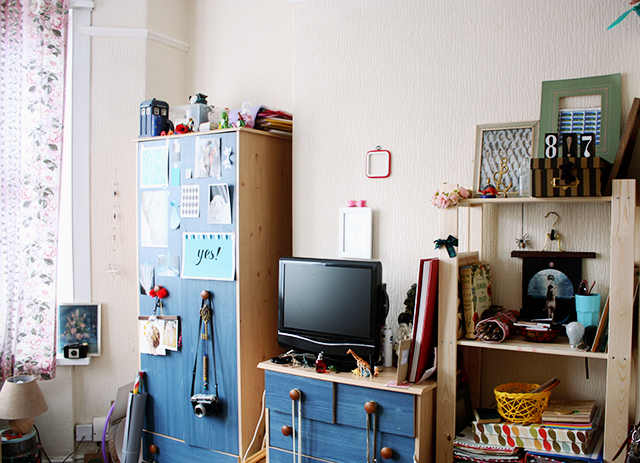 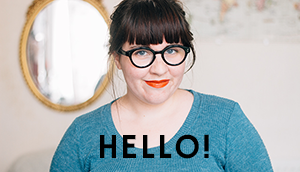